A brief background of origin and achievements to date (Jan. 2016).

In August 2011, Longford Co. Co. published the Draft for Consultation, prepared by consultants, Brady Shipman Martin. The report stated that Granard town was in decline and that in order to “survive and thrive in the present environment, Granard must re-invent itself as a destination town”. It pointed out that Granard had much to offer visitors if it was properly marketed and if it provided a “point of interest” to visitors. In particular it highlighted the importance of Granard Motte, the highest such Norman Motte in Ireland.
Subsequent to the publication of the report, the community of Granard and the surrounding area had a number of meetings to discuss the findings and what could be done to help the area. What was needed was a suitable property in which to locate a really good, modern visitor centre 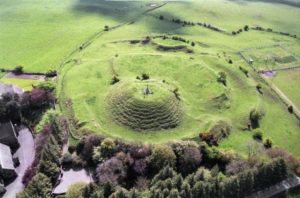 At the time NAMA had taken possession of what seemed to be the ideal property. It included 2 new commercial units on 15 acres of land. It was located approx. 200 meters from the town centre and it adjoined the site on which Granard Motte was located.
This was considered the ideal location for a visitor centre and it already had the necessary infrastructure (buildings, car park and land). However, there was one big problem, NAMA were putting the property up for sale immediately.

A number of community meetings were held to discuss the situation. These were very well attended. The community decided that this was a “once-off” opportunity and that, although there was no funding in place, the community should try to purchase the property at a reasonable price, subject to the completion of a positive feasibility study.
An interim committee was put in place and in May 2012, after a bidding process, it was agreed to purchase the entire property for €265,000, subject to the completion of a feasibility study. 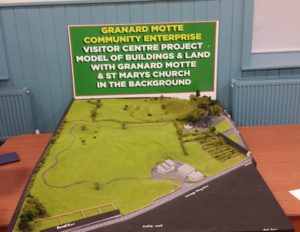 oup was established and subsequently, Granard Motte Community Enterprise Ltd was formed.
GMCE Ltd has worked tirelessly since then.
– €10,000 was raised by way of interest free loans from members of the community and local business. This was used to pay a refundable booking deposit on the purchase.
– A 500 Community Members Draw was launched and sold out. This is now in its 3 year and, thanks to the wonderful support of the local community, which includes Granard and the surrounding parishes, this draw realises a profit of approx. €35,000 each year. This has enabled the committee to obtain Bank Funding
– A comprehensive feasibility study was carried out by Exodea Consultants Ltd. This was completed in June 2013.
– GMCE Ltd. met with prospective stakeholders such as the local County Manager, local councillors, Longford Tourism, Failte Ireland, local schools, tour operators, Longford Community